Leon was bred by Mary and Brent Mattix, Brenmar Ridgebacks, Brush Prairie Washington.  He is out of Can/AM CH Thornberry Akala and K-Tai Jet Stream to Brenmar.

Leon was my first show dog and has been entirely owner-handled to all of his wins. Leon has conformation tiles in both the US and Canada, and earned both his Grand Champion title in the states and his Champion title in Canada with ease.  Leon is showing potential as a performance dog as well.  He already earned his Rally Novice title and is working towards a Rally Advanced title as well as AKC agility titles.  He is also a dream to live with and is a very easy going, sweet tempered boy.

​Leon is a proven sire with two litters of puppies, including our own Cinder.  His stud book is closed for live/chilled breedings but we do have a small amount of frozen available. 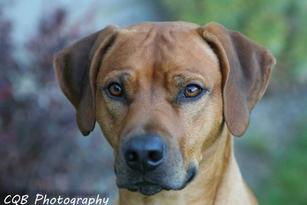 OFA records can be viewed  here